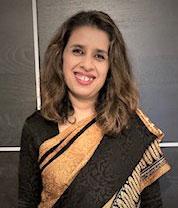 Dr. Shruti Shukla is a Molecular Biologist with over fifteen years of International Work experience in Cancer Research and Vaccine development. Following her Post-Doctoral Fellowship from Northwestern Medical School, Chicago she was involved in various aspects of Breast Cancer research ranging from Genomics to Epigenomics. Being married to a diplomat she has worked in the United States, Russia, Ukraine, Israel, India, and The Netherlands. She was actively involved in developing international collaborative ventures in Cancer research while she worked at All India Institute of Medical Sciences, New Delhi (Breast Cancer Methylation Target Arrays with USA); Leiden university Medical Centre, The Netherlands - Sanjay Gandhi Postgraduate Institute of Medical Sciences, Lucknow (Comparative Epigenomic Profiling of Acute Lymphoblastic Leukemia between Indian and Dutch patient cohort ) besides her teaching and mentoring commitments. Her research on Epigenetic control of microRNAs in Ewing Sarcoma was presented at the American Association of Cancer Research, USA in 2009.She was associated with the NIH/CDC program on development of adenoviral vectors as a vaccine platform for Avian Flu, Foot and Mouth Disease and for Cancer Gene Therapy at Purdue University Cancer Centre USA. She has been actively involved in conceptualizing grant applications for DBT, NIH and Dept of Defence USA.

She moved to Geneva in 2020 and worked as a consultant to the World Health Organization along with joining OHSL. At OHSL, she is developing a global Breast Cancer Data Alliance with active participation of eminent medical and research professionals from USA, France, India, Latin America, China, Africa and the WHO.

Dr. Shukla is passionate about cross-cultural enrichment and has been a board member to International Women’s Associations in Israel, The Netherlands and Switzerland. She has represented India as a parent at International schools such as The American/ British School of Hague and American International School of Israel. She enjoys learning new cultures and languages and has basic proficiency in Russian, Ukrainian, French, and Hebrew.